Chronic Obstructive Pulmonary Disease (COPD) is the 4th leading cause of death worldwide. The number of deaths is projected to increase due to higher smoking rates and an aging population in many countries. COPD (also known as emphysema) results in chronic airflow limitation. The disease is preventable but there no cure.

OCT enables high-resolution imaging of airway structure. The video below illustrates the structural differences between normal (left) and emphysematous (right) airways. These virtual fly-through animations were rendered from volumetric OCT data acquired from corresponding airways in patients with and without emphysema.  As we move distally further along the airway we pass the branch points of other airways. We also very clearly observe the destruction of the alveolar walls in the emphysematous airway.

As OCT imaging is a relatively new imaging modality for the airways, it was particularly important for our group to correlate OCT images with histology so we could understand what OCT could tell us about the small airways. 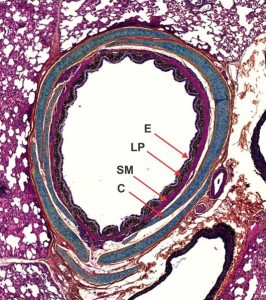 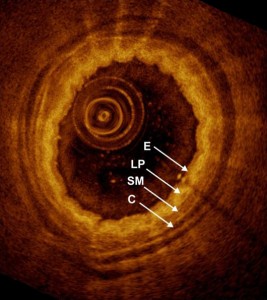 This is an example from a study we did with resected pig airways. The contrast in OCT images is generated by local backscatter and the intensity in the images correlates with backscatter intensity. By comparing the two images, we can identify the airway wall components in histology responsible for the stratified backscatter in the OCT image.

Going from low backscatter in black to high backscatter in yellow, we see that cartilage (C) plates look very dark, the lamina propria (LP) is very bright, while the smooth muscle (SM) and epithelium (E) come in between the two.